Check out our recent article in this year's Brand Finance Football 50 report. The article examines the implications for brand managers and the impact on fans as increasing commercialisation spurs clubs to seek to update and improve their brand and visual identity.

By Tom Connell, Visual Identity and Brand Consultant for VI360

Few, if any brands in the world generate such passion and obsession as football brands. And arguably nothing inspires that passion more than the club logo and colours. In branding terms, these key components comprise the visual identity. It’s been intriguing therefore to watch the various football club rebrand projects that have been taking place over the last few years, some which have been far from smooth. Of course it is nothing new to change a logo, or a strip, or even a club name, but now that these changes are being made in the name of ‘The Brand’ it seems fans have become more sensitive to change.

As the football industry becomes ever more commercialized, the drivers for visual identity change seem to be increasing. They include a desire to modernise, to drive merchandise sales, to reach new global audiences and occasionally simply for the ego of the club’s owner. Clubs are now being renamed following a merger or acquisition as in the case of City Football Group’s (holding company owning Manchester City) and the purchase and rebranding of Melbourne Heart to Melbourne City. We are seeing in many cases however that these changes are being made to simplify reproduction of visual identity across an increasing number of brand carriers.

Visual identity for a football club means more than a logo design. However, the logo or club crest is the core of the identity and often most precious to fans. Traditionally many of these logo designs have drawn from a heraldic system and this has led to complicated designs as new elements are added to denote some part of the club’s heritage. A club such as Newcastle United is a particularly good example of a complicated heraldic crest. Even if the club’s crest only features one or two of these extra elements (see Real Madrid’s crown or Roma’s Romulus and Remus) they all add to complexity making them harder to reproduce. We are therefore seeing more and more clubs evolving their designs, simplifying them, giving them a more professional edge, and reflecting the behaviours pioneered by the big commercial brands

But change is not always welcomed and simplifying a complicated logo can result in conflict between fans and club owners. Making the transition from old to new proving to be a serious challenge for some. 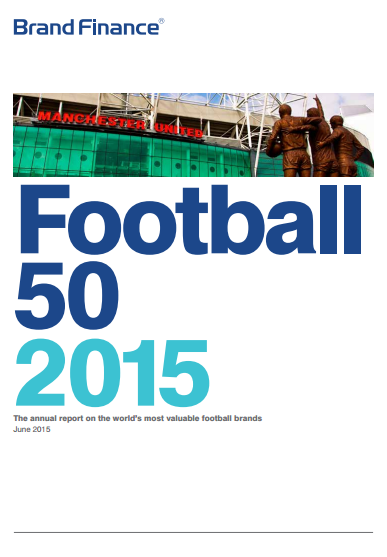 For the full article and the rest of this fascinating report into the world's most valuable football brands, please click here.

The Brand Finance Football 50 features the league table of the world's 50 most valuable football brands. This year's report also features an in-depth look at the growth of football club brands in the Middle East with Al Ain FC, sponsorship analysis as well as club interviews with City Football Group, Everton, Southampton and West Ham United. It's well worth a read especially for our fascinating visual identity article.