Juventus' J Academy and the Growth of Football in China

Football in China is growing, backed by a government strategy to become a “world football superpower” by 2050. We speak to Luca Adornato, Brand Development Manager of Juventus about how the club is using its J Academy brand to develop in the highly lucrative Chinese market.

Juventus has taken its first steps into the increasingly lucrative Chinese market by launching the club’s J Academy in Shanghai. USA and China have been identified by Juventus as a key growth markets in which to expand its programme of training schools and camps. In China, the aim is to develop the Juventus brand amongst young people and families in a country set to see considerable investment in football in the coming years.

Putting the launch into context, China recently announced plans to become a “world football superpower by 2050”. The government has outlined a strategy which aims to get 50 million people playing football by 2020 and deliver a World Cup victory within 15 years. These are lofty ambitions but there’s no reason to think this vision impossible. With a football mad President leading the charge, China may yet become a major player on the world stage and consequently, make it a major market for global football brands looking to develop internationally.

The Chinese Super League (CSL) has already seen considerable developments as can be seen by the considerable transfer fees paid this season. The deals involving Alex Teixera (£37.5m) and Jackson Martinez (£31.5m) showed the league possesses the financial clout to compete with the world football elite for top talent. With both players receiving no shortage of offers from potential suitors in Europe, the lure of the big money CSL is obviously significant.

The Chinese government however wants more than just investment in talent at the highest level. There is a keen desire to diversify the national economy, with sport and especially football being seen as central to this aim. Although these ambitions may take time to come to fruition, the world’s major football brands like Juventus have already identified a burgeoning Chinese football market that represents huge opportunities for brand development.

Juventus’s J Academy initiative launched in Shanghai in February and is the first location in China for its youth academy training schools. The programme has seen considerable success in brand development and awareness globally since its inception and currently features 20 academies in 17 countries with plans to increase to 30 academies in 25 countries in the next three years.

Whilst football training academies are not a new concept for clubs looking to increase global awareness, Juventus is taking a different approach to many others with J Academy.

“Our roots in these markets are very deep...We are no longer just a licensor, we’re now a partner with the companies”

Whereas many football clubs will look to license their brand to third parties and take a hands off approach, Luca Adornato, Brand Development Manager for Juventus is keen to stress Juventus’ involvement in the J Academy brand. “Our roots in these markets are very deep”, explained Luca. “We are no longer just a licensor, we’re now a partner with the companies and we’ll be in these new territories for a minimum of 30 days per year”.

The J Academy represents a huge opportunity through which to develop awareness of the Juve brand, to build an emotional connection with new young fans and critically also with local families, communities and businesses. The aim is to help develop football at the grass roots level, staying for the long term. “We establish at least a three year contract with the local partner, we give them the training tools they need and the commercial tools too”. Whilst local partners are responsible for delivery of the brand they are supported in every way possible, “the partners are given the guidance and tools they need to deliver the brand locally with a localised website which they manage themselves. This has the distinctive Juventus look and feel and is still a real Juventus product”. 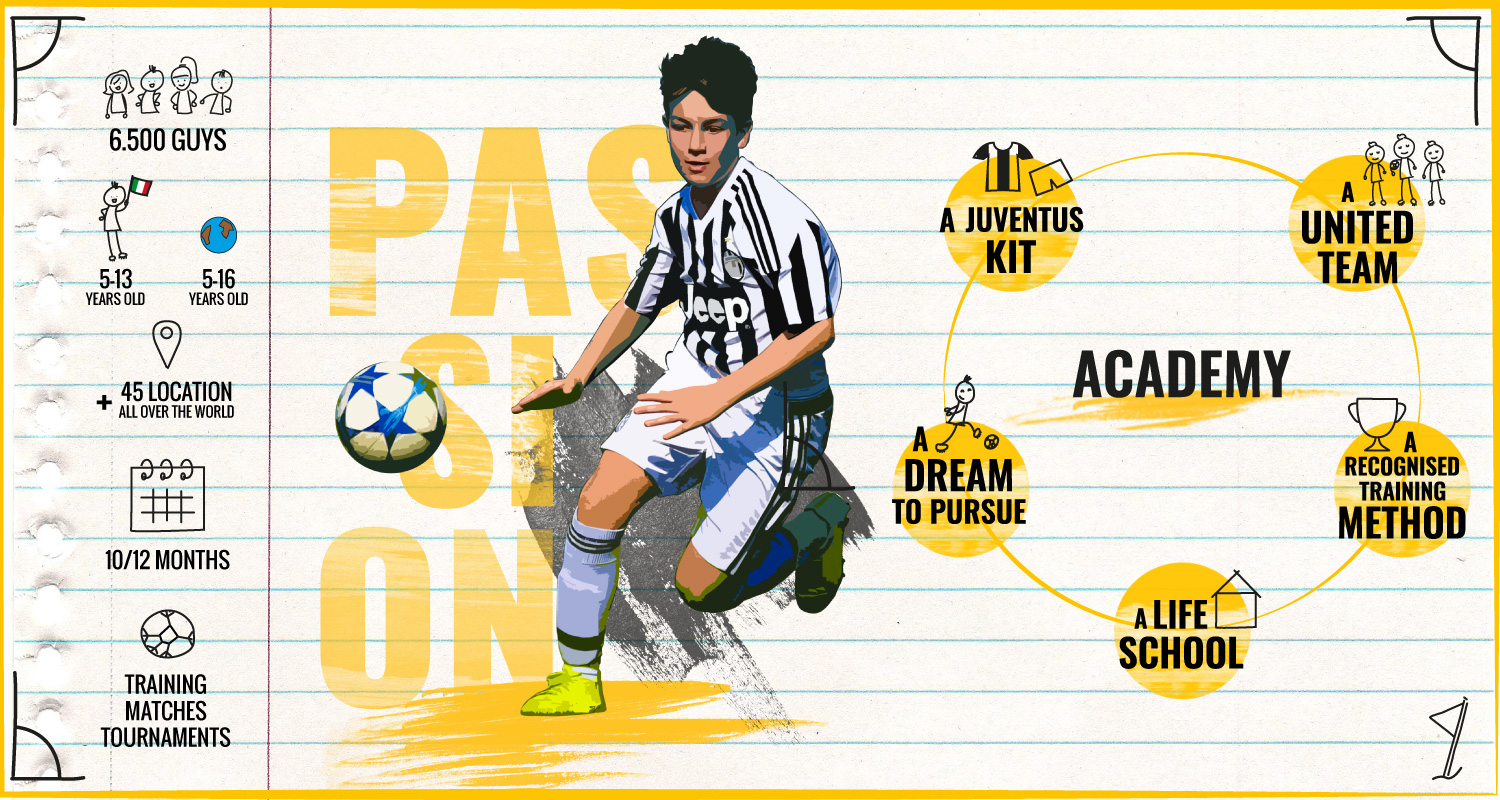 Part of creating a strong brand for J Academy has been the development of a new visual identity, which takes its cues from the Juventus brand. The J Academy name has been shortened from ‘Juventus Academy and new designs were created to connect with the essence of the brand.  “J Academy aims to ‘grow up people before players’, believing that children should be focussing on enjoying themselves rather than being under pressure to perform”, said Luca.

The Bianconeri have identified huge opportunities in China and are now looking to take advantage of an increased focus by the government and critically a shift in spending trends. Luca explains that the new J Academy in Shanghai has been strategically located close to the Shanghai Disney Resort which is currently under construction to the east of the city and is expected to be a major destination in the future. “We’re hearing that families in China are increasingly looking for experiences that they can share together”, Luca explains. For this reason J Academies will be located close to exciting destinations with plans in the future to set up J Academies within theme parks and even on cruise ships. “The J Academy is part of our strategy to develop Juventus from a football club to a global brand”.

China can be been seen as a tough nut to crack and of course this is still true in many cases. However, the recent shift in government policy may give and edge to those football brands that seize these opportunities early. “The plan for Juventus and J Academy is to grow quickly and have 1200 kids playing at the Shanghai academy within three years. The programme will be rolled out in more Chinese cities with Taizhou, Zhuhai and Xiangtan all close to an agreement and plans for Shenzen, Hong Kong and Guangdong too”. Care is being taken however to choose the right local partners. According to Luca, “These are exclusive arrangements which are arranged with the partners for certain cities. We are focussed on finding the right partner that can be a representative for the Juventus brand in that territory”.

This is an incredibly exciting time for football in China, a market with enormous untapped potential. . Rather than simply license the brand, Juventus with J Academy have identified the value of partnership in developing long term brand awareness and strong connections with communities and businesses, which may well set them apart from other football clubs looking to seize these same opportunities. If China can achieve its lofty ambitions then brands like Juventus will be well established when these dreams become a reality.

Visit www.Juventus.com for more information on Juventus and J Academy.

This article was written by VI360 for the Brand Finance Football 50 2016, the only study of its kind to analyse and rank football clubs by the value of their brands, providing a deep understanding of the opportunities and challenges facing the industry.

Accenture's New Brand Strategy - Will It Work in 2021?